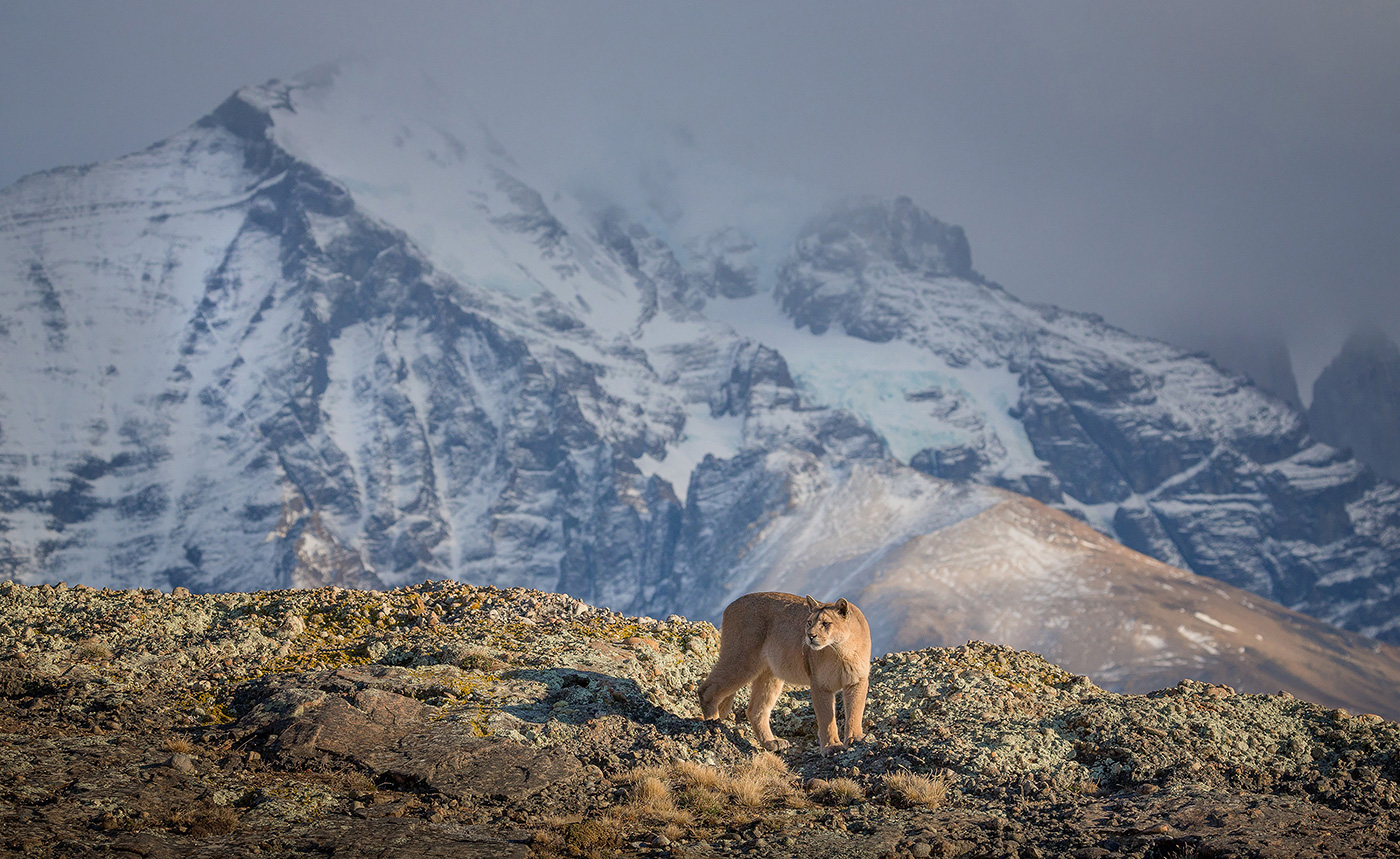 Almost twenty years ago I observed my first wild puma. At the time, I was spending several weeks together with my friend and colleague Karl Jourdan in Torres del Paine National Park to photograph guanacos. One morning, on the way back to our campsite, a female puma with her two cubs crossed the road in front of us. It all happened so very quickly that we could not even take a snapshot. But we had seen “the ghost of the Andes”. This brief sighting burned itself deep into my memory. I fell in love with this wild landscape at the end of the world and with the majestic and elusive pumas. That days I decided to return to photograph them.

Many years later I travelled back to Patagonia for a photo story on the grasslands of the world. And I noticed that the conditions for pumas had improved. The shy cats had been well protected in the Torres del Paine National Park for some time; they had plenty of food thanks to the many guanacos and were thus able to form a stable population. And in fact, at that time, I also got the first pumas in front of my camera. I quickly realized the potential for a great story and decided to do everything I could to return here as soon as possible to shoot the first photo story on pumas in the wild.

Over the next two years, I spent a total of seven months with the pumas of Patagonia. My wife, Silke, accompanied me on many of my journeys. It was to be a very successful, but also a very ambitious project, which I could only realize with the support of the sportswear manufacturer PUMA and National Geographic Magazine.

For my project, I hired the best puma trackers in the area. We needed a cook, had to equip a hut as a base camp and needed to negotiate agreements with landowners to take pictures on their private land at the edge of the National Park. To make sure that our team could get from base camp to the puma habitat and remain as flexible as possible, we had to use two off-road vehicles.

Every morning we set off long before sunrise to find the pumas. Our patience was often put to the test, and situations when I could take really good pictures were rare. On some days we had to walk up to 20 kilometers (12 miles) through rough terrain with heavy photo equipment or wait many hours in extreme wind conditions and freezing temperatures until something happened in view of my camera. During one of the winters, it was so cold for days that we had barely enough firewood to heat our little hut, and although we were tucked into our thick down sleeping bags wearing winter clothes, we woke up from the cold in the middle of the night, unable to continue sleeping. These low temperatures also froze all the water in the pipes and we only just managed to thaw enough water for cooking and drinking – a hot shower was unimaginable. Ultimately, only a lot of stamina, an experienced team and the strong belief in being able to realize this unique photo story led to success.

During the many months I’ve been watching the pumas, they got used to my presence. This allowed me to accompany two females all the time while raising their cubs. In addition, I was able to photograph many never-documented behavior, like gunaco hunts and mating pumas. My dream became reality.

The pictures from this project received important awards:

This is only a selection of pictures from the project. If you are interested in publishing a story and would like to see all images, please contact our office. The illustrated book PumaLand showcase this unique photo project. The best of the pictures are put together here. Informative text relate the adventures, eye to eye with the wild pumas of Patagonia, and of the hardship involved in creating this photographic work. The book is published by the prestigious publisher Knesebeck and produced in the best print quality.

The illustrated book EL PUMA also showcase this unique photo project. It is written by Eduardo Pavez Gálvez. The book is published in Spanish and English by the prestigious publisher Editorial Kactus in Chile. It is produced in high class print quality.

All pictures from the PumaLand project can be ordered in the size of your choice. Our Fine Art Prints are produced on Hahnemuehle high quality photo paper. You can order prints only, framed prints, prints on aluminium Dibond or mounted under acrylic glass. All items will be sent in a breakresistant container. With your order you accept our general terms and conditions.

For further information and pricing please contact us by e-mail.

Without the support of many partners this complex photo project could not have been realized. My special thanks to the sportswear manufacturer PUMA and to National Geographic, who have been particularly committed to this project.

I also thank all our other partners for their support.